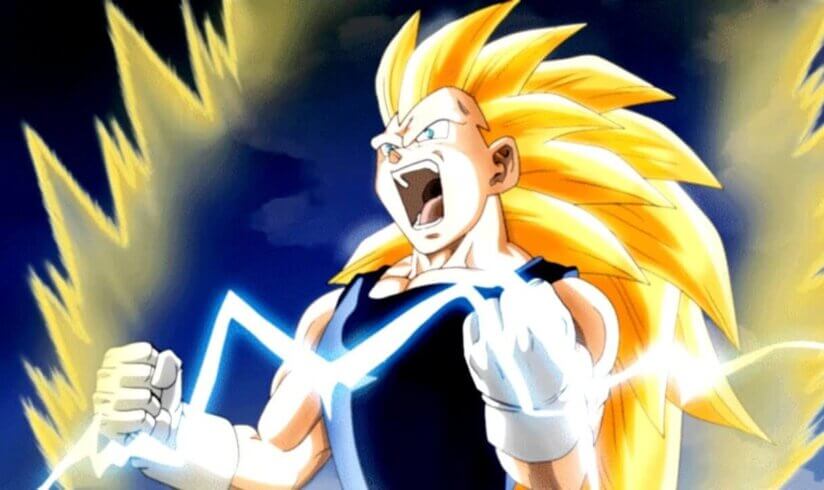 Vegeta is one of the most naturally gifted Saiyan’s around, barring perhaps Broly. When Earthlings were toying around with power levels of a few hundred Vegeta was rocking a power level in the teens, having a power level of 18k when we first meet him.

So why is it that a low-class warrior like Goku is the only unfused Saiyan to go Super Saiyan 3 and why can’t Vegeta go SSJ3?

Vegeta can’t go SSJ3 because he hasn’t trained in the otherworld, unlike Goku. A Saiyan can achieve SSJ3 through intense training an average mortal body isn’t capable of, and Goku only achieved SSJ3 through years of training in the otherworld. Also, SSJ3 is a very limited transformation, so Vegeta probably hasn’t even tried.

Goku and Gotenks are the only ones.

Goku never returns from one of his trips empty-handed, and his journey to the otherworld saw him return with the Ultimate Super Saiyan transformation, SSJ3 or Super Saiyan 3.

Vegeta is gobsmacked when he sees it, and is furious that Goku didn’t use it in their fight. But the form uses so much power and put such a physical toll on the body that it shorted Goku’s time allowed on Earth.

Likewise, for Gotenks, it seriously cut his fusion time in half. So it seems that SSJ3 isn’t a power meant for the ordinary mortal man. Vegeta should get credit for staying alive during the Cell fight, but if he had died as well then perhaps he’d have SSJ3.

But ultimately who cares about SSJ3 because…

So we’ve established why Vegeta can’t go SSJ3 but does he even want to? We knew Vegeta has a high fighting IQ, and have seen him forgo more powerful forms because they are impractical.

The ultra muscley SSJ1 form Trunks rocked during the Android fights was straight up ignored by Vegeta, even though he could do it because it made him too slow and used up too much power inefficiently.

So even though SSJ3 has the raw power, it’s possible Vegeta would want to focus on making SSJ2 more powerful, as Toriyama stated that SSJ2 could eventually be as powerful as SSJ3.

Other forms have surpassed it.

Super Saiyan 3 was the ultimate powerup at the end of Dragon Ball Z. But it’s been massively outclassed by subsequent transformations, giving Vegeta even less reason to learn it.

In GT we had SSJ4 with is one more powerful than SSJ3 (Thanks basic maths!) but without the power usage limitations.

Then in Super, we have SSG and SSB, not to mention the other Rage forms Trunks and Broly were able to achieve which were massively more powerful than SSJ3.

So Vegeta can’t and doesn’t even want to touch SSJ3 anymore when he’s got Super Saiyan Blue rage.

When Vegeta first saw it, he probably wanted to learn how to become a Super Saiyan 3 after seeing it’s raw power but wasn’t able to because he hadn’t trained in the otherworld. If Vegeta wanted to, he could have killed himself, trained in other world and then learnt SSJ3 just like Goku, but there’d be no point. Vegeta is now way more powerful than any Super Saiyan 3 transformation so probably couldn’t care less that he can’t do it.

How old is Gohan?
9
Link to When does Vegeta turn good?

When does Vegeta turn good?
10
Link to When does Goku go Super Saiyan 2?