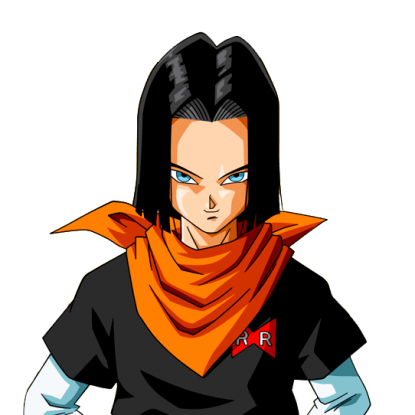 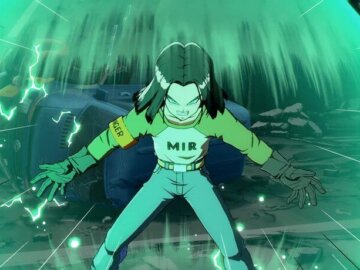 Android 17 started life as a regular human until he was transformed, along with his sister Android 18, into an Android by Dr Gero. This transformation gave him the super human ability of unlimited energy, meaning he can keep do Ki attacks without getting tired. But sadly little is know about Android 17’s past, and we don’t even know Android 17’s name.

Android 17 started off life as a wild card, without any allegiance to any side in particular. His first move after been awakened by Dr Gero was to kill him, then his main priority seemed to be to drive a car rather than kill Goku. After the Cell Saga Android 17 then joined the ranks of the good guys and spent his retirement protecting animals from poachers on monster island before Goku called him out of retirement to help with the tournament of power.

Dragon Ball Z Android 17 has established himself as an extremely powerful and tactical fighter. He may be a one trick pony, with his only major asset being his unlimited energy, but he’s learned to utilise this ability to perfection, and has developed all sorts of tactics around this ability. His signature move is his Ki shield, but he also makes excellence use of spamming weak ki blasts to keep more powerful foes at a distance.

When it comes to training Android 17 is very much a lone wolf and hasn’t actually received formal training from anyone to our knowledge. But he was still able to go from a Super Saiyan level warrior to a Super Saiyan God level warrior, all through training by himself on monster island, which is a remarkable power up, perhaps the greatest solo power up in Dragon Ball, alongside Golden Frieza.

But perhaps the greatest training his did was with his Fight IQ, as he finally learned to utilise his unlimied Ki to it’s full extent. The old Android 17 was caught off guard by Cell and absorbed by him, but the Android 17 of Dragon Ball Super would never have let his guard down, and would have been able to hold Cell of with his energy attacks the same way Tien did with his Tri-Beam.

So as you can imagine Android 17 has a very Ki intense fighting style. You could go as far to call Android 17 a defensive fighter as well, as his primary tactic is to wear out his opponent leaving either his allies to finish off stronger opponents, or him to catch them off guard in a weakened state. The longer the fight goes on the better it is for Android 17 but this sort of tactic wouldn’t wash with Saiyans like Goku and Vegeta. But in a team battle you need a combination of different warriors styles, and it was a combination of Android 17’s defensive work, alongside Golden Frieza‘s and Goku’s power, that led him to win the Tournament of Power.