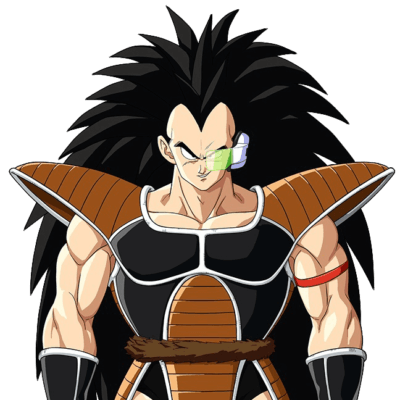 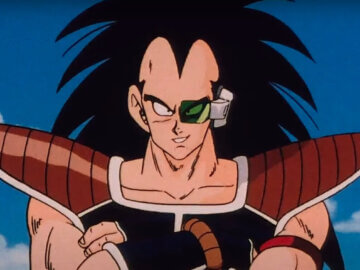 Raditz is the brother of our favourite hero Goku. While Goku was raised on Earth, he had a much more traditional Saiyan upbringing, being sent to a random planet as a baby, destroying it and then joining the ranks of the Frieza Force like Nappa and Vegeta.

He was one of the last Saiyans in existence when we meet him on Earth as Frieza destroyed his home planet Vegeta and most of his race. Luckily for Raditz, he wasn’t on the planet even though both his parents, Bardock and Gine, were.

He came to Earth to recruit Goku to the Frieza Force, but upon Goku choosing Earth over his Saiyan heritage, he got kinda mad and kidnapped Gohan. Needless to say, things didn’t work out too well for Raditz after this.

Raditz coming to Earth kicked off the whole Dragon Ball Z saga and made everyone aware that there were a lot more powerful foes from different planets they may need to battle.

Raditz was raised on the battlefield and has spent his life going to weaker alien planets and easily beating the natives in battle for the Frieza Force. As such, he developed an extremely arrogant and cocky fighting style that relies on his brute strength rather than his fight IQ.

As he normally faced greater numbers, he developed a lot of techniques to take over two or more fighters, making him very efficient at clearing crowds quickly. This style is fine for weaker opponents, but Raditz didn’t develop an ability to fight creatively and overcome more powerful opponents, which cost him dearly when fighting Goku and Piccolo.

Against Goku, Piccolo and Gohan, Raditz seemed to snatch defeat from the jaws of victory. On paper, he should have won, but his arrogance and lack of battle sense cost him the victory. At several times Raditz was powerful enough to finish off all opponents, but he wanted to play with his food and let Goku and Piccolo try out their techniques.

He could have killed Goku when his foot was on his chest or easily finished off Piccolo when he had one arm but chose not to. Although Raditz has the killer instinct of the Saiyans, he lacked the clinical finishing of Vegeta and was killed by a Special Canon Beam when he probably didn’t need to be.

Despite Raditz’s shortcomings, we don’t have how much latent potential he actually had. Since he is the brother of Goku, it’s possible that if he received training in Earth Ki techniques and learn Super Saiyan, he could have been equal to Goku or Vegeta by Dragon Ball Super.