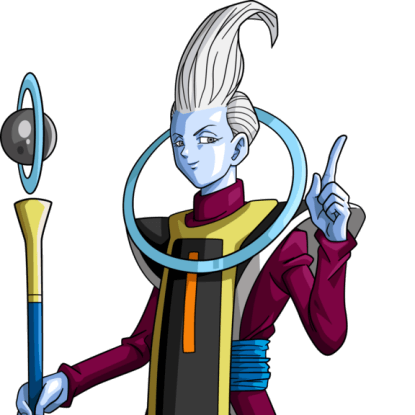 Whis is the Angel of Universe 7, and is the highest authority in the Universe, even higher than Beerus and the Supreme Kai. But even though he’s the unseen ruler of the Universe, you wouldn’t know it from his personality, as he seems more interested in trying exciting Earth delicacies then stopping planets being blown up. Even though he is above Beerus in status, he still serves him and attends to his every whim.

Although we have never seen Whis fight anywhere close to full strength, we know he is stronger than Beerus who was considered the strongest fighter in the Universe before we learnt of Whis’ power.

And we’ve never seen Whis fight at full strength, but we see by the way he trains Goku and Vegeta, that he takes a defensive approach to martial arts, and prefers to handle things with a zen like calmness. The signature technique of the Angels is Ultra Instinct, in which the body acts by itself to move in a ridiculously fast, yet calm, way.

Whis isn’t just a strong fighter, he also has a strong magical ability which lets him bring people back from the dead and even rewind time using his temporal do over. So even if Whis couldn’t beat you in a fight, you can bet that he’d have a bag of spells to put you in your place.