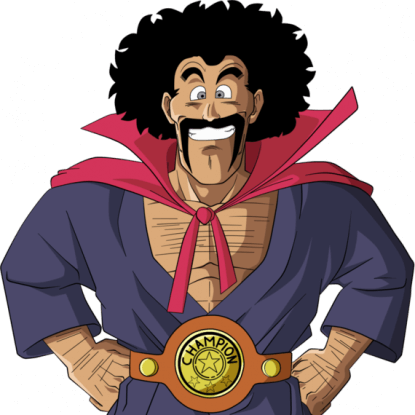 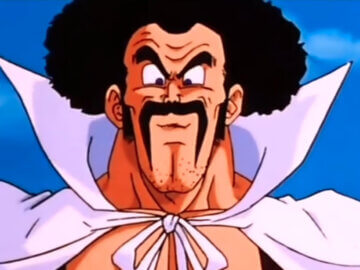 
Who is Mr Satan?

Mr Hercule Satan is considered by many to be Earth’s mightiest champ! He absolutely dominated the World Martial Arts tournaments when no Z Fighters competed and gained worldwide fame for his showmanship and impressive martial arts record.

However, when compared to Ki based fighters like Goku and Vegeta, he finds himself massively outmatched and would lose to the likes of Trunks, Goten and even Yamcha! This doesn’t stop his ego writing checks his body can’t cash, and he often finds himself at the brink of embarrassment when attempting to fight people like Cell, Majin Buu and Android 18.

Even though Mr Satan isn’t very useful in a real fight, he showed himself to be extremely useful to the Z Fighters when defending Earth from threats and can credit himself with helping defeat both Cell and Majin Buu. He’s also a family man, and through his daughter, Videl marrying Gohan, he became part of the Son Goku tribe, alongside his adopted friend Majin Buu.

Mr Satan managed to become the strongest non-ki human by quite a large margin, which means he must have a lot of natural talent and is an extremely hard worker. It’s slightly sad that he never had a real teacher who could teach him how to utilise Ki as if he trained with Master Roshi, he’d possibly he’d have been the strongest human surpassing Krillin and Tien.

When it comes to training, in his youth, Mr Satan possibly worked as hard or harder than the likes of Goku and Vegeta but didn’t have the right teacher to push him. And by the time he discovered the super-powered fighters like Cell, he was either too old or too stubborn to dedicate himself to a new form of martial arts. His daughter Videl was able to learn the basics of Ki manipulation really easily, so Mr Satan could probably have gained a significant power boost if he trained, but his work ethic dropped off a lot after he became Champ, and he didn’t even keep up his old training. So you have to look at the career of Mr Satan as a lot of wasted fighting potential and laziness in his old age.

Mr Satan is trained in a fictional Karate/Wing Chun style of fighting and became the best at it in the World. The World Martial Arts tournament is an MMA style tournament, so he’d have to be adept at countering all of Dragon Ball Earth’s styles. Not only does Mr Satan possess a lot of strength, but he also has a lot of speed and was faster than his fastest student Caroni and stronger than his strongest student, Pirozhki.

But Mr Satan’s real weakness is his lack of Ki. He can’t fly, he can’t produce or defend Ki blasts, and he can’t put any real weight behind any of his punches. He’s also extremely arrogant, and this gets him into dangerous situations from which he feels he can’t back out.
But at his core, Mr Satan is a good-hearted man. He’s extremely charismatic, and despite being a bit of a diva, is pretty decent to his friends and family. Through friendship with Majin Buu, he managed to turn in him into one of the good guys, so he makes up for his lack of fighting ability with his attack dog Buu.