Everyone loves Android 18. And by everyone, I mean Krillin, and by loves, I mean is scared off of. But surprisingly little is known about her, and we know absolutely nothing about her pre-Dr Gero turning her into an Android. So even a basic question like how old is Android 18 is difficult to answer, but we here at Dragon Ball Guru think we have the answer pretty well figured out.

Android 18 was born around Age 744, making her 23 years old when she is awoken in the Android Saga. By the Tournament of Power in Dragon Ball Super Android 18 is around 36 years old.

When looking at Android 18 and her twin brother Android 17, they don’t appear to age at all from when we first meet them to the end of Dragon Ball Super.

This is due to the cybernetic upgrades, specifically the Eternal Energy Reactor, that gives them unlimited energy but also prevents their body from ageing.

It’s unknown if they will never age or if their ageing has slowed down a lot. But this also makes it harder to work out how old they are, but we think we found a way!

Even though it’s not explicitly stated how old Android 18 is, we can make an educated guess based on the information we do have. Technically this is headcanon but hear me out!

We know that Dr Gero was collecting information on Goku using his mechanical insect spies, and he stopped collecting data right before the Namek Saga in Age 762. And assuming Dr Gero makes the Androids in the order they are named, Android 17 and 18 were probably made together right after Android 16, probably around Age 762.

We also know that Android 18 used to be an ordinary girl until she was taken by Dr Gero and turned into an Android who didn’t age. So because Android 18 appears to be an 18-year-old girl and we can assume this she was android-fied around Age 762, that would make her birth year Age 744.

This is a common theory on the internet, but I’m not sure it holds true. The numbering system has existed since Dragon Ball, and it simply denotes the order in which the Androids are created, no their ages.

Android 17 and 18 are also twins making it kind of impossible that they are different ages. It’s possible Dr Gero kidnapped them a year apart, but that doesn’t really make sense. Surely he’d go for a 2 for 1 kidnapping deal.


Thanks for reading!!! Click Here to read more articles about Android 18 and if you'd like to see any of our Character Profiles, please click here. If you have any feedback please feel free to use our contact form.

How did Android 18 become human? 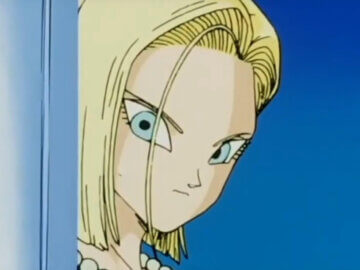 How old is Gohan?
9
Link to When does Vegeta turn good?

When does Vegeta turn good?
10
Link to When does Goku go Super Saiyan 2?