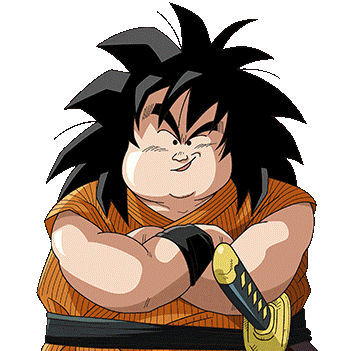 Yajirobe is a Samurai mountain hunter and is one of Goku’s oldest and greatest allies, dating back to when Goku was a kid in Dragon Ball. Even though they had a fight over fish when they first met, they soon became friends, and Yajirobe saved Goku’s life many times.

Yajirobe is often accused as been a coward, as he is always hiding away rather than fighting. However, Yajirobe’s tactical retreats have greatly benefited the team, and Goku wouldn’t have beaten King Piccolo or Vegeta without Yajirobe saving the day, which he wouldn’t have done if he’d been killed like, say, Yamcha.

Don’t let Yajirobe’s appearance fool you! He may be a big man, but he’s lightning-fast and is able to keep up with the likes of Goku, Krillin and Yamcha in sparring. He is also a fully trained Samurai warrior and uses his Katana to deadly effect.

When it comes to training, we know Yajirobe must have worked incredibly hard to be both a Samurai and Ki based Martial Artist. He is one of the strongest humans to have ever lived, so clearly, he had a good training ethic. However, the only training we see him do in the show is halfheartedly. He seems to be content with his current level of strength and wants to spend his retirement eating a ton of food and hanging out with his feline best friend, Korin.

Yajirobe is often seen hiding and running away from battles, but survival instinct has kept him alive and useful to everyone. Even though he isn’t the strongest fighter in the team, he is excellent in the support role and usually ends up healing his allies with Sensu beans. He also shows signs of intelligence and impeccable timing in battles, like when he sliced off Vegeta’s tail while he was in Great Ape form.

But while useful as part of a team, you don’t want Yajirobe as the only person on your team. He isn’t very good at attacking head-on and can get very nervous in the heat of the battle. Yajirobe is also pretty pessimistic and doesn’t seem to even attempt to overcome adversity like a Goku, or a Vegeta does.