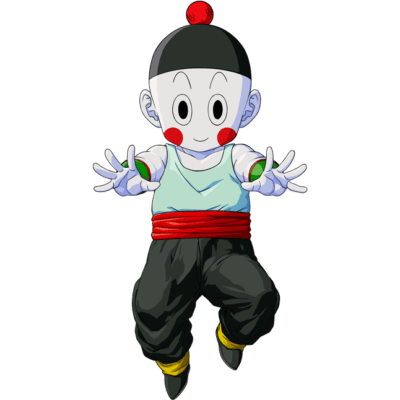 Chiaotzu is a former student of the Crane Martial Arts School, and long term best friend of fellow Z fighter Tien. When introduced in Dragon Ball he was a worthy adversary for Krillin, however as the years went by he found himself increasingly out of his depth compared to monsters like Frieza, Cell and Buu.

Despite his odd appearance Chiaotzu is indeed a human, but part of a mutant human sub-race causing him to be short with white skin and rosy red cheeks. While he is stronger than regular humans he still isn’t as strong as a Saiyan or Namekian.

Despite Chiaotzu’s small stature he manages to play the cards he has been dealt very well, and often uses clever tactics and unusual techniques to cause his opponents trouble. But ultimately his bag of tricks only got him so far, and when the Z fighters starting battling aliens like Nappa and Vegeta.

Chiaotzu was trained in the Crane style of martial arts that focuses on flying and Ki techniques to gain an advantage in battle. While Chiaotzu would normally lose a melee battle he is good at fighting on his own terms. We can see this when he fights a  young Krillin, he just flies in the air and fires finger beams, which was a little unfair because Krillin couldn’t fly.

Despite being so weak, you can’t blame a lack of training as Chiaotzu proved himself to be a very hard worker in Dragon Ball and the first part of Dragon Ball Z. First he studied at Crane school, then had several other trainers including King Kai and Mr Popo. His best friend Tien is also a hard worker, so you know that Chiaotzu would have regular good sparring with him. So we can’t fault Chiaotzu’s training ethic or his fight IQ, but sadly that isn’t enough to be the best!