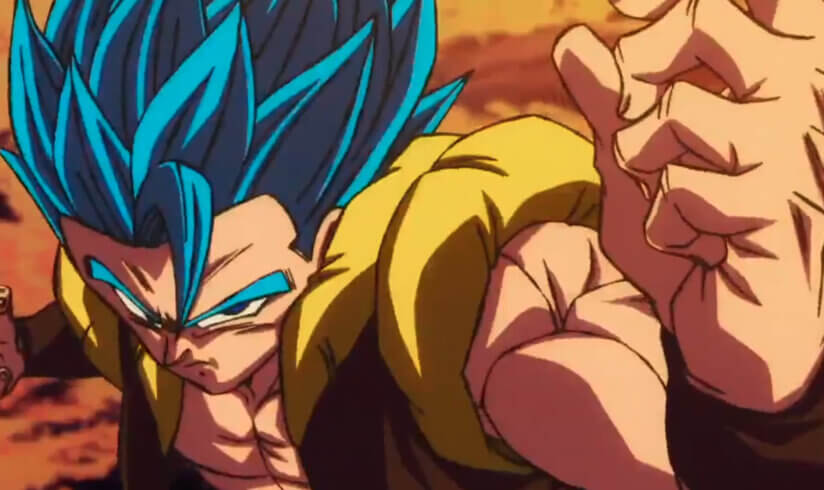 One of the coolest things to come out of the Dragon Ball Super: Broly movie was the introduction of the fused Saiyan Gogeta. He is a combination of both Goku and Vegeta after they successfully perform the Metamoran Fusion Dance Technique. We see him take on the Legendary Super Saiyan Broly using Super Saiyan Blue (SSGSS), and winning. So we thought we’d look at 8 Fun facts about Gogeta from the Dragon Ball series. Enjoy!

1. Gogeta was non-Canon for years.

2. Gogeta has appeared in 32 Video Games.

For a character that was non-canon for so many years, it seems remarkable that he has appeared in a massive 32 Video games. He first made an appearance in 1995, so it’s no wonder that he’s featured in so many video games, considered he is such a cool character.

3. Gogeta has two voices, despite having one voice box.

While it makes sense thematically for Gogeta to have two voices, it doesn’t really make sense in-universe, and no explanation is given. Goku’s voice and Vegeta’s voice should have fused together into a single voice box, and maybe another voice actor should be used. So Christopher Sabat and Sean Schemmel make up the English Dub, and Masako Nozawa & Ryō Horikawa make up the original Japanese voice. While it is a cool effect, it doesn’t make any sense!

4. When the Fusion Dance goes wrong, than Veku is born.

As avid fans of Dragon Ball know, if the Fusion Dance is done incorrectly it makes a weaker fighter, who is either fat or thin depending on how the dance went wrong. Rather than just being called Fat Gogeta or Thin Gogeta, this wierd mutant is actually called Veku. Whether this name is 100% canon is up for debate, but it’s certainly a cool idea.

5. Vegeta refused to turn into Gogeta to face Super Buu.

Vegeta always has to be awkward. Even though Goku and Vegeta both knew about the Fusion Dance, Vegeta had to much pride to try it out. He thought the dance looked stupid, and didn’t want any part of it. It’s very funny that Vegeta ends up being forced to fuse with Goku using Potaro Earings, so he might as well have done the dance anyway.

6. Gogeta was conceived before Vegito, but Vegito appeared first.

The reason why most movies aren’t considered canon is because they aren’t based on Toriyama’s Manga, but made by a different team entirely. The Movie team had the idea for Gogeta, which would be similar to Gotenks in Dragon Ball Z. Toriyama learnt of this and created his own fusion character named Vegito that appeared in the Dragon Ball Manga first before Fusion Reborn was released. Toriyama didn’t want to step on anyone’s toes and so made Vegito different than Gogeta on purpose. Toriyama clearly like the character of Gogeta so much that he put him into official Canon in the movie Dragon Ball Super: Broly.

Even though time was of the essence due to the fusion time limit, Gogeta thought it was more important to come up with a cool name then deal with Broly. The first name he comes up with is Gokuta, and then Vekugo before Piccolo tells him to hurry up. Before he uses Goku’s technique of Instant Translocation, he settles on Gogeta. A much better name than Vegito, in my opinion, as it is a better blend of Goku and Vegeta.

What does Gogeta and the Queen of England have in common? They both might say, “We are not amused”. It makes sense that a Fusion of two characters might say “we” instead of “I”, but it’s still strange to hear. But since Gogeta has two voice boxes, maybe it’s entirely appropriate to say “we”. I’ll leave it to the people at Oxford University to decide if a man with two voice boxes has the right to say we. All I know is “we” at Dragon Ball Guru think Gogeta is awesome!

We leave you with a clip from Dragon Ball Super: Broly of Goku and Vegeta practising the Fusion Dance, and unintentionally creating the monster that is Veku.


Thanks for reading!!! Click Here to read more articles about Gogeta and if you'd like to see any of our Character Profiles, please click here. If you have any feedback please feel free to use our contact form.