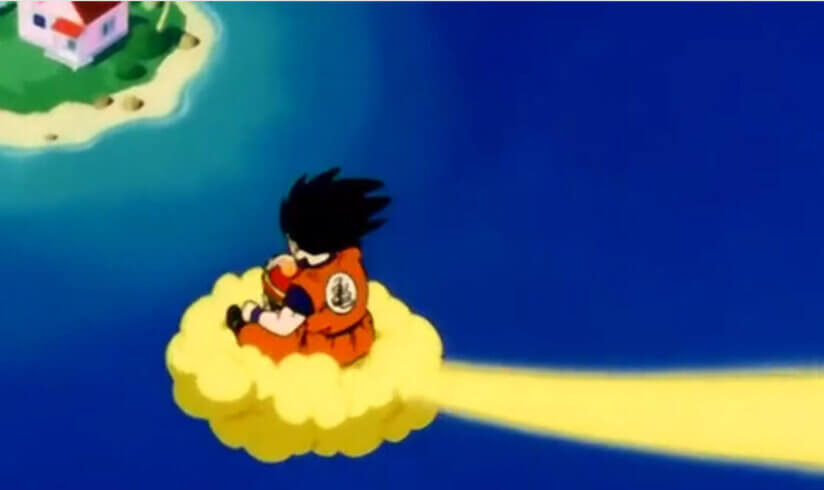 When did goku learn to fly?

One of the most iconic images of Dragon Ball is Goku flying around on his beloved Flying Nimbus. It was with him through thick and thin in the early days. It is even featured in the early episodes of Dragon Ball Z, despite Goku knowing how to fly. But one episode it seems that Goku didn’t know how to fly, and then another episode it seemed like he could. So when did Goku learn to fly?

Goku learning to fly is never shown in the Manga or Anime. However, it is widely believed that Kami taught Goku how to fly between the 2nd and 3rd World Tournament. The first time we see Goku fly is while fighting Piccolo Jr in the final, so know he must have learned how to fly before the tournament.

Why didn’t Master Roshi teach Goku how to fly?

Master Roshi is one powerful manipulator of Ki. He is even able to hold his own in the Tournament of Power long after Yamcha, Tien and Chiaotzu became useless. Flying would probably come naturally to him, so it’s confusing why he wouldn’t teach his students, let alone his most gifted student Goku, such a standard technique. But unfortunately, Master Roshi’s rivalry with the Crane School and Master Shen means he doesn’t like using their signature technique; flying. He even called it overrated! So this could explain why Goku is such a slow learner when it comes to flying, and why even as an adult flying down snake way he has to walk because it takes up so much energy.

Goku’s final training in Dragon Ball takes place with Kami, or more accurately Kami featuring Mr Popo. But we mainly see Mr Popo schooling young Goku on some basic fighting principles, and flying is never mentioned. Because this training takes part at the top of the lookout it’d make sense for Kami and Popo to teach Goku how to fly so he can get down safely. The only thing we know is three years later Goku can apparently fly, so if Kami didn’t teach him, he’d have to have taught himself. Goku is a very gifted student but generally doesn’t learn new techniques himself so he must have been taught by Kami unless…

Goku learnt it in the heat of battle

If I may offer an alternative theory, perhaps Kami didn’t teach Goku how to fly. Perhaps while in the heat of battle, out of sheer frustration and lack of options he charges towards Piccolo, jumps with all of his might. He then finds himself lifted off the ground with his ki. It wouldn’t have been the first time he learnt a technique in the heat of battle, most notably Super Saiyan while battling Frieza. After doing it once he’d have several years to practice before Raditz shows up and since he didn’t have a teacher that would explain why he isn’t very good at it.

So we can’t give you a definitive answer. It’s never shown in the Manga or Anime, Goku having a Rocky-style training montage where he learns to fly. But we clearly see that Goku can fly so…