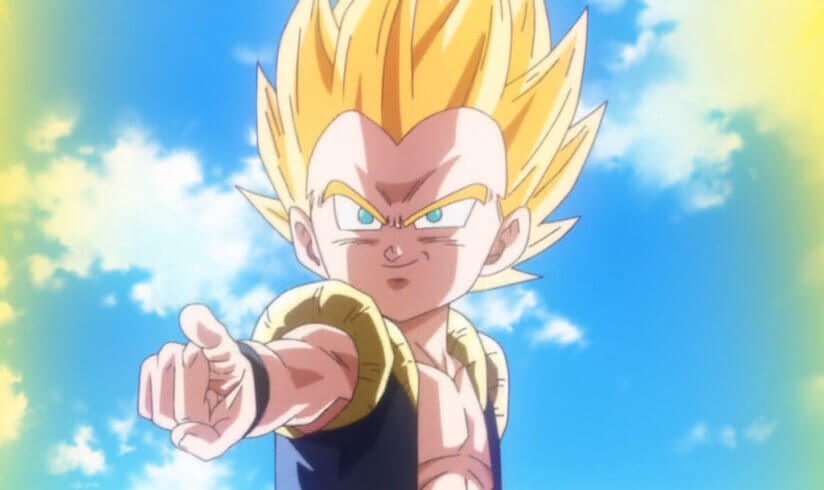 Who doesn’t love the brash young, arrogant half-Saiyan named Gotenks? Even in the face of extreme adversity, namely Majin Buu, he still finds time to crack wise and troll everyone.

But as popular as Gotenks is, he’s still a bit of a mystery as he doesn’t make that many appearances in the Manga and Anime. So we’ve compiled a list of the most frequently asked questions about Gotenks. Enjoy!

Gotenks is the fused body of Goten and Trunks after they perform the Fusion Dance but only lasts for 30 minutes.

It combines their name, their appearance and their power levels to create a super-powered fighter a lot stronger than the sum of its parts.

Gotenks was born out of necessity to try and deal with the threat of Majin Buu and has since made the odd appearance in Dragon Ball Super.

How Strong is Gotenks?

The exact power boost of the Fusion Dance is highly debated, but it at least multiplies the individual users’ power level. You can also view our guide comparing the Fusion dance to the Potaro dance, to learn more about the power.

Before the fusion, Trunks and Goten were already some of the strongest fighters on Earth but fused, they officially became the 2nd strongest on Earth, only Majin Buu being stronger.

Is Gotenks Stronger than Goku?

Then after Goku learnt Super Saiyan Blue and then Ultra Instinct, Goku became a lot stronger than Gotenks. Though if Gotenks were to get a similar power boost, he could be in leagues with Goku again, but this is unlikely.

We were led to believe that Super Saiyan 3 (SSJ3) was some mythical form that Goku only achieved because of the mystical otherworld training and because he was so incredibly strong.

But then Gotenks just whips out an SSJ3 effortlessly. This is due to Gotenks seeing Goku turn SSJ3, so they knew what to aim for.

In the Dragon Ball Universe, it’s a lot easier to perform a technique if someone shows it to you first, hence why all the Universe 6 Saiyans turned Super Saiyan easy peasy.

After all, Vegeta skipped Super Saiyan 3 and went straight to God mode. But we can assume he probably learnt SSJ2 pretty easily while in the hyperbolic time chamber and just never felt the need to use it with Majin Buu.

He soon discovered SSJ3, which is much more powerful than SSJ2. Even though SSJ3 wastes a lot of energy, there’s a 30-minute time limit anyway, so Gotenks wouldn’t gain any advantage using SSJ2.

Why is Gotenks so cocky?

We know from how cocky Vegito and Gogeta are that all fusions give the users a certain air of arrogance and cockiness.

And if you add that to the personality of the two cheeky chappies: Trunks and Goten, then it’s no wonder Gotenks is so cocky.

You take two cocky Saiyans, multiply their cockiness together, and you get the ultra cocky character Gotenks.

What if Gotenks and Gogeta fused?

If Gotenks and Gogeta were to fuse, then their names would probably be either be Goteta, Gogenks, Gogekas or even Vegotenks.

However, it’s not being established in DB lore that you can do a fusion dance with two fused fighters. If you could, then it’d be one powerful fighter, but we’re sorry, it will probably never happen.

Is Gotenks in GT?

Trunks is one of the central characters in Dragon Ball GT, and Goten is also still knocking about on Earth, going on dates when not getting taken over by Baby.

But for whatever reason, Gotenks doesn’t appear in Dragon Ball GT at all. You’d think he’d appear a few times when the Earth is threatened, but Trunks and Goten seem happy to lose their fights individually.

Maybe they hadn’t practised it in so long they forgot how, or maybe Trunks was too powerful to fuse with Goten.

But the real explanation is probably that Gotenks had the sense to avoid the trainwreck that was GT.

Even though I liked Dragon Ball GT, the character of Gotenks was probably better off not being associated with GT. I still have nightmares about moustached Vegeta to this day!

Is Gotenks in Dragon Ball Super?

Yes, Gotenks does appear in Dragon Ball Super. He can be seen fighting Beerus at Bulma’s birthday party when Beerus starts beating up the Z fighters.

However, it’s only a small cameo appearance as he is swiftly beaten by Beerus and quickly defuses into Goten and Trunks.

Who is Fat Gotenks?

Fat Gotenks is the same character as Gotenks but appears when the Fusion dance is done wrong.

If the two characters don’t move in sync perfectly then, the resulting fusion is fat and less powerful. It’s also possible that you can get thin Gotenks if the fusion dance is done wrong.

There’s no way to undo Fat Gotenks, you just need to wait the 30 minutes required for the fusion to undo, and then you can try again.


Thanks for reading!!! Click Here to read more articles about Gotenks and if you'd like to see any of our Character Profiles, please click here. If you have any feedback please feel free to use our contact form.